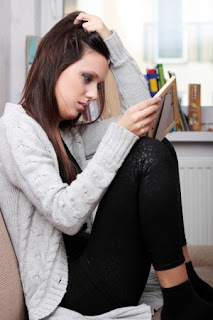 At first I struggled with the prospect of being alone. But I had gotten used to it. A new-found sense of freedom made the time pass quickly and eased my conscience somewhat.
And then today I found an old photograph taken of us when we were toddlers. A Christmas picture with Santa taken at the mall. We were smiling. We looked happy in our matching outfits. Thankfully, I didn't remember it.
And I didn't recall when things had changed, only that they did. We'd grown up together, with so many things in common and yet we were so different from each other. I'd always been the one that cared too much, until one day, I just didn't.
That day had come two years ago. It had been two years since I'd held her in my arms. Two years since she'd died. Two years and I could still feel her pulse weakening beneath my fingertips. She had passed out but I didn't turn loose of her, I couldn't. Her words echoed in my head and my grip had tightened.
"Loser. You'll never be anything, and no one will ever love you. You're ugly."
It was her morning mantra directed at me as she greeted me at breakfast every day.
Tears had streamed down my face as hers had turned an off shade of blue. My were fingers were locked around her neck, all I'd had to do was wait. I remembered it fondly just like it was yesterday. I'd counted in my head until she'd stopped breathing. Had I known it would be that easy I would've done it years before I finally did.
How odd that the old photo made me miss her. The duality of loving someone so much that you actually hated them had always been my cross to bear. And now, apparently, so was the guilt.
She had been my best friend.
My only friend.
My twin.