What Price for Love 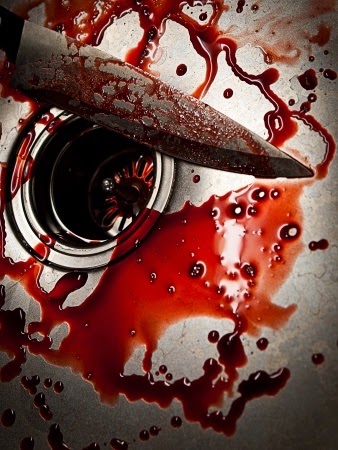 "My god Jamie, what have you done?" I said it out loud as I shook my head and scanned the damage. He'd left a huge mess this time. Blood spattered on the walls; it was everywhere. And pieces of... flesh. It was going to take me hours to clean it up. I hadn't gotten used to it. I never would.

He had blacked out again. He was lying on the floor next to what was left of her. His hand still gripping the knife and a piece of her dress. Her head was turned towards him, her brown eyes open and a half smile on her face. He had done that; positioned her afterward.

"Oh James..." I tried to speak but I felt it rising in my throat; the sandwich I'd had an hour ago mixed with bile and stomach acid. I opened my purse and threw up inside it; all over the plastic baggies I'd brought. I should have been better prepared. It hadn't made me sick like this before.

I told myself I didn't care. I looked down at him; lifeless like the corpse next to him. He was a beautiful monster. Light blond hair with curls at the nape of his neck and honest blue gray eyes, with the longest, darkest lashes I'd ever seen on a man. He looked like a harmless California surfer instead of the serial maniac he was. And I was in love with him.
Years ago I'd found him like this with another dead girl lying next to him. He'd strangled her. I'd disposed of her body then sat with him until he came back around. It had been the start of a three year love affair, and there was no turning back.

I went outside to look around. My car was parked on the street. Apparently he'd left his somewhere and they'd returned in hers; it was parked in the drive. I wondered why she hadn't pulled into the garage, he should've insisted. There were no neighbors with a clear line of sight; the house was on a lot at the end of the street. A cul-de-sac; it was a rule.

I couldn't keep doing this. It was sick. He was sick. And I was no better. I ran down the steps and fell to my knees next to a flower bed in her front yard. I heaved, once, then twice... thankfully nothing came up. There was nothing to be done about it; I loved him. But how many more would pay the price for my demented obsession with James Albright?

I felt safe when I was with him. I knew he'd never let anything happen to me, I kept him out of jail. I was his safety net, and... he loved me.
And in the eyes of the law, I was an accomplice. An accessory after the fact. I couldn't stop him now even if I wanted to, and he knew that.

But I didn't want to. He knew that too. I enjoyed his devotion and it made me feel special that he allowed me to live. But I couldn't keep cleaning up after him; it had begun to make me physically ill. And it was my DNA that was being left all over everything. I was as careful as I could be, but forensics were tight these days. They knew what was going on. And as much as I took away evidence of him, I left some of me behind. Maybe he knew that too.

I forced myself to calm down. Slow breaths and a little blue pill did the trick. I could do this.

I retrieved plastic gloves and towels from the car, and my 'kit', which contained garbage bags and disinfectant cleaner. I pried the knife from his hand and took the piece of her dress. I washed the knife in the sink and put it back into the wooden holder on the counter. The small ripped piece of cloth went into my purse, along with any pieces of her. The purse would have to be burned now anyway. I was having to improvise, and I didn't like that. That's when stupid mistakes were made. Jamie had taught me that.

I wrapped her body in one of the huge black bags from my kit and dragged her to the garage. If he'd had her pull in like he was supposed to, I could've put her body in the trunk of the car. Now I wasn't sure what to do. I rolled her out the door onto the garage floor and left her there. I'd have to wait until dark, or until Jamie awoke. He would be disappointed in me. I'd let him down.

I feared no retribution, he would hold me and love me. Kiss me and tell me it was okay. I lived for those moments of approval. And I'd worked hard for each one I'd gotten. But I was at a loss this time, I couldn't carry the body by myself. He would have to help me. Wasn't he the one that hadn't followed the rules? I wouldn't dare point that out.

I returned to the bloody mess in the living room, sized up the situation then headed to the kitchen. I filled the sink full of soapy water and got to work. Within an hour I had most of the blood mopped up and the dirty towels in my trunk.

I sat on the sofa and flipped through fashion magazines as I waited for James to awaken. I watched him for another hour. How I wanted him to kiss me and tell me how much he loved me. Why wasn't he waking up?

Now it was getting dark. I'd been there for three hours. Something was wrong. I knelt down, placing my hand against his cheek. It was ice cold. He was dead.
Later I'd find out that he'd had a cerebral aneurysm. His death had been quick.

It was better than he deserved.