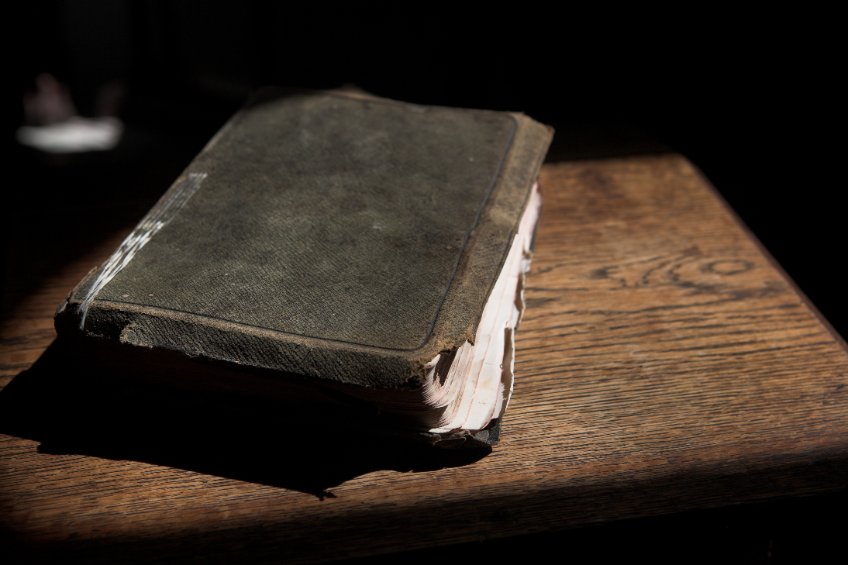 “Mama, what does this word mean?”
Tuesday handed me the tattered bound up papers and I read the words.

“Where did you get that?” I demanded.

“Grandpa gave it to me. He said it was his grandmother's. I've tried reading it, but you have to turn the pages,” she took it back from me, “like this mama, you just turn the paper over and there is more on the back of it.”
“Yes Tues, it's called a 'book'.”
“I know THAT. Grandpa told me. But I don't understand most of it. What does this word mean?”
She pointed on the page.
“It doesn't matter. You shouldn't be looking at that. Grandpa shouldn't have given it to you. It's... it's not allowed.”
“Why?”
“Here, give it to me and get your Tech Pal out, you should be sitting in your room gaming instead of reading anyway. It's not good for you.”
Tuesday thrust the book towards me and shrugged her bony shoulders. She was small for eight years old.
“Here, you can have it. None of it makes any sense anyway. A bunch of words I don't understand, and I tried to look them up, but ROXIE says they don't exist. It's stupid.”
I fought back tears. The old man shouldn't have done it. Stirring up things long forgotten. I barely knew what any of the words meant either. But the one Tuesday had pointed to, I knew.
“Slavery”. It was on the list of canceled words. It had been since my mother was a baby.
There were only a handful of people left that remembered what the canceled words were. I struggled to recall, but only came up with seven of them; there had been over a hundred. Never spoken, never written, erased from time, but not from the memories of a select few that were still alive. It hadn't changed anything. The words still existed in action and thought, only they weren't allowed to be spoken now so everyone could pretend like the things they did weren't wrong. Never getting called out had cleared consciences and provided false virtue.

Back then, people called it 'political correctness', but it was nothing more than a way for the government to control our words. It was censorship that we all embraced.

Grandpa had tried to teach me about it when I was Tuesday's age but mama wouldn't hear of it.
Fourteen years of Process Clearing worked on most, and mama had been no exception.

So Grandpa was shushed, and I'd grown up like everyone else, oblivious to the horrors of the past. And I'd chosen to keep it from Tuesday. After all, I wanted to be a good citizen.

Keep the old ones quiet long enough, and they would die out. Then history could be re-written, so no one would know about the sins of the ages. Our ancestors looked noble and innocent, and so would we. No matter what crimes we committed.
It was a perfect plan. Utopia would finally exist. Or would it?

Posted by LoLa Autry at 2:30 PM No comments: