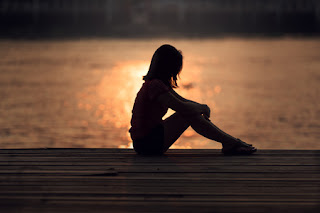 Leanne hadn't left her house in over seven years. She hadn't even been outside on the porch or the back patio. She'd forgotten what the air smelled like; the smell of fresh cut grass and the stench from the meat processing plant that should've been shut down ages ago.
She walked carefully along the new sidewalk, observing the turquoise houses. Just yesterday there had been nothing there. Just a wide expanse of weeds and wildflowers growing unchecked. Wasn't it just yesterday?
When had it changed? No, it wasn't yesterday.
She shook her head and tried to remember the way. She counted four pink houses in the row, and one yellow one. The rest were greenish-blue with white shutters. It made her sad. Maybe she wouldn't go back home. Maybe she would keep walking; walk and walk and walk until she fell down from sheer exhaustion.
The row of houses seemed to go on forever. She couldn't go back home now; she had no idea where she was. She shivered and pulled her gray cardigan tighter around her.
Her flip flops made a smacking sound with each step and she tried to remember the rhyme her father had told her when she was a little girl.
That was yesterday too. But she'd already forgotten.
He had told her what to do when she felt like this. She could see his face and hear his voice, but now the words were jumbled inside her head.
“If you get lost, find a policeman.” He'd spoken gently and patted her on the head. She had been five then.
A tear rolled down her cheek as she remembered the happy times with her father; living in his car, playing at the beach and collecting shells. He'd bought her cotton candy at the fair with money they'd gotten from collecting bottles, and they'd walked hand in hand to the end of the pier to watch the sun set.
That was yesterday too. But she'd never forget that. It was the one thing she could remember forever.
The sidewalk ended, but the row of houses never would. She sat down and pulled a half eaten moon pie from her sweater pocket. She wished she had an orange soda. The moon pie was a bit stale, but the sweetness took her back to her childhood; when there were no yesterdays, only tomorrows.