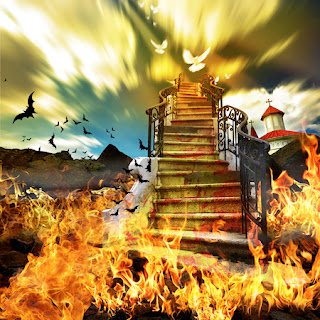 “What kind of message does that send when you go out of the house looking like that. Do you want people to call you a freak?" Lenny cocked her head to one side, and gave me that disapproving look she'd perfected.
I stared down at the floor. People already called me a freak. It wouldn't matter what I did now, I'd been labeled. And I really didn't care, it was who I was, or at least it was who I'd become. And maybe I'd done it on purpose. I didn't belong here; I didn't belong anywhere. I knew it and so did she.
“Annalise? Are you listening?”
I shook my head without looking up at her. “Yes ma'am.”
“Well then go back upstairs and change your clothes. And wipe that black stuff off of your face. You look like a Satanist.”
That was her favorite one. A Satanist indeed. She wouldn't know a Satanist if one held her down for a blood ritual. Of course for that matter neither would I. I'd lived my entire life in Colvale; a quiet little town with a grand population of just under two thousand. There was one religion and two churches. The residents all looked the same, thought the same, acted and reacted the same. Anyone with black eyeliner and an Anarchy t-shirt was a devil worshiper and a freak. That was me. A wanna be member of a sub-culture that didn't exist in my neck of the woods; just a freak, a lonely freak. It probably also didn't help matters that I was almost six feet tall with slanted golden eyes and fiery red hair that I kept cropped close to my scalp. I was their lost lamb; a project to some. Those with their plain clothes and religious zeal. I sat next to them in the pew every Sunday, waiting for God to strike me down. He couldn't miss me. The pseudo-goth in the third row amidst a sea of long print dresses and modest hairstyles. My face had been scrubbed clean, and yet the wildness within me screamed from every pore. I had no control over it.
Lenny didn't know how to deal with me, no one did. I'd been in seven foster homes since my mother abandoned me when I was two years old. I'd been with Lenny for three years; and she had more patience than most. I think on some level that she loved me, no else had even tried. Not that I'd ever heard her say it. But it was in her soft gray eyes. She cared, and it was for that reason I decided to spare her. But none of the others.
It was the second Sunday in February of last year the first time the pastor shook my hand. The iciness of my skin burned into his, stealing his warmth until he yanked his hand away. I smiled and narrowed my eyes concentrating my thoughts into his until I heard him gasp for air. I looked away and he coughed.
"Nice sermon Pastor Jim." I winked at him as the color began to return to his face and I lost myself in the crowd. I knew then that he would be the first.
Days turned into weeks and now it had almost been a year to the day, but he hadn't looked at me since. Maybe he knew what I was waiting for; he was, after all, a man of the cloth. As an educated spiritual man, he should've known the signs.


The day of reckoning had arrived; a Sunday on a full moon, a bitter cold morning with frost on the ground and even colder hearts waiting to receive their judgment. Today was the day.