Always be careful what you wish for...you just might get it. 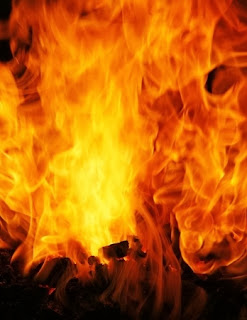 
He didn't have a pitchfork, or horns and he wasn't even red. I had no idea who he was until he asked me if I wanted to make a deal; I laughed. Even though his appearance was misleading, and his approach was certainly cliché, I was convinced enough to tell him I'd think it over.
I can't say I wasn't shocked, it's not every day you get that kind of offer. And I must say that I was very surprised by his demeanor; cool and enticing, and he was actually quite handsome. I chuckled at the pun; such a handsome devil.

He said he could put an end to my suffering; that I could finally have what I had wanted for years.
But I wasn't so sure I wanted to make a deal with...him. I couldn't even say it. It went against everything I had been brought up to believe in, and yet somehow, I couldn't resist the urge to hear him out. Did he really want my soul? It actually seemed kind of silly, and yet, I knew he was actually who he said he was. I could feel it. There was an electricity about him, and yes, dare I say, a fire.
He had a contract all ready for my signature. Nothing in blood, no grand ritual, just a pen for me to sign on the dotted line. He said I could take a few days, read it over. I could even have a lawyer look over it if I wanted. He seemed to find that idea a very amusing one indeed.

There was a lot of technical wording, legalese I didn't understand, but the bottom line was this: I could have Cullen. Cullen Markham, the only man I had ever loved, only he didn't love me. Basically, this would mean that I could be with him whenever I wanted. All I needed to do was to imagine him, and he would appear before me. But for every minute I spent with my beloved, I would also spend a minute in hell. Literal hell; fire and brimstone and demons and torture. He painted a very clear picture of it; or rather he planted a good picture of it, right inside my mind, I could almost feel my skin burning. I shuddered.
And then... he brought Cullen to me. And my skin was burning again, but this time from sensuous kisses. His mouth upon mine and ecstasy before unknown, all in a matter of seconds. And then Cullen was gone.
The deal maker smiled and handed me the pen and I literally signed my life away.
And then, there was Cullen; because I had thought of him, because I had wanted him, because I had made a deal with the devil, he appeared before me.

He knelt down, taking my hand and kissing it. He held it to his face, and he whispered my name. Tears flowed from my eyes, looking down upon him, knowing that at long last, he was mine. I pulled him up to me, my lips seeking his, enjoying slow hot sensual kisses for what seemed like an eternity. And it was. A lifetime in a flash, my time with Cullen was over.

And now I am burning in a different way. Day and night, with only a faint remembrance of what it was like to be with my cherished love. Now I will spend forever on fire, the flames crackling against my skin, burning my flesh; leaving no scars, because there is never any healing. The smell of sulfur permanently saturating my every pore, and no tears to cry. This is my payment for loving him; and what I now must endure. My sweet hell.