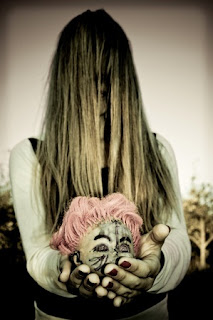 Ashley ached all over. She sat up in bed and rubbed her eyes; they were swollen and sore.
I could see her clearly in my mind. She was a vision of evil intent wrapped into an exquisitely beautiful package; but not for long.
I centered my focus and began the hex.
She blinked her eyes, unable to register the horror that began playing out as her porcelain skin began to erupt into horrible blisters. In a few minutes they would break open and bleed. The skin underneath would crack and fall away. And then, the true intent of my spell would be revealed; deep wrinkles embedded into her skin. I spoke the incantation as I held the head of a broken doll in my hands Soon her hands would begin to gnarl and twist; the blue-black veins becoming more prominent as her skin got thinner and thinner.
She was aging. I was giving her the face and body of a feeble old hag, while allowing her to keep her youthful, shallow, and cruel mind.
Soon they would laugh at her. She would be sorry for what she'd done to me. She was nothing more than a bully, and the bigger they are, the harder they fall.
I was going to take it all from her. Those things she treasured the most; no more selfies, no young friends to hang with. And worst of all, no more cute boys. She would have no bae, ever again.
She tried to grab her phone, but it slipped from her arthritic hands, falling onto the bed. I laughed and Instagram popped up on her screen. She was aging in her photos too. She tried frantically to delete them. It wasn't working; they were still there. She tried to delete her account. It was no use.
She was getting hit after hit, comment after comment. They all said the same thing.
You're ugly. And old, so very old. Get off Instagram. We HATE you.
The same poisonous venom she'd spat onto me, a complete stranger.

I smiled, knowing it was time. The popular girl was about to become unpopular. Tears poured from her squinting eyes as she saw her follower count dropping. She screamed in agony as she saw her following go from over 7 thousand, down to two; her mother and her sister. And neither of them had logged in for over six months. She struggled to check her other accounts. And it was just what she feared, all of them had zero followers. Everyone had left her; she was nobody.
She couldn't fathom why this was this happening to her. She had always been so... beautiful and popular. She was a Queen B.
Then she heard the laughter. My laughter. She jerked her head around. No one was there. This couldn't be real. She thought she was going crazy. Or dreaming. That was it; it was just a nightmare. She'd awaken soon and everything would be fine. I cackled again.
Her skin began to itch and she clawed at herself. She couldn't stop. Her youth was fading away.
She threw herself down upon her pillows and sobbed until she was out of breath, her last bit of energy spent.
I lit tea light candles and set the doll head in front of them; the ritual was almost complete. Unpleasant minutes passed as I watched the dwindling flames and Ashley coughed as her lungs began to collapse.
“I'm sorry.” The words escaped her lips in a dry whisper. I smiled. She had found redemption.
I smashed the doll head and the spell was broken. I am not so cruel after all. 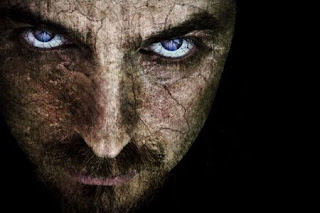 I hadn't seen Seth in days. The last time he'd come to me, we'd argued and he'd left in a huff. He didn't believe that I loved him, and wanted me to prove it. And now it appeared we were going to have the same discussion again. He thought he could break my will, but I knew I was stronger than that. At least I thought I was.
I sat on my bed as he paced back and forth in front of me. I should have turned on the light; the sun had gone down just as he'd arrived, and it was almost too dark to discern his expression. He was going to plead his case again. I rolled my eyes; I'd had enough.
“Do it... for me.” His voice was low, almost a whisper, but his words had a commanding power that gripped my soul.
I fought against them. “No.” I said it flatly, with no emotion, although my breath was shallow and uneven. He had shaken my reserve and he knew it. He was pleased.
“Then you don't really love me, do you, my sweet Alice?” It wasn't really a question.
“What do you want from me? You think I'll agree to murder some random innocent person in cold blood because you say it will prove my love for you?”
“Yes. But hardly random, and certainly not innocent.”
“That's ridiculous. You're.... you're insane.”
“Perhaps, but that's where we're at. Put up or shut up my darling.”
“Absolutely not. I won't do it.” I folded my arms across my chest and shook my head.
“Then I guess we're done here, aren't we?” He tugged on his leather gloves and smirked, his blue eyes darkening as they narrowed ever so slightly.
“Yes Seth, I suppose we are.”
He turned and headed for the door, the cloud of darkness following him like a trail.
I couldn't do it. I wouldn't do it. And he couldn't make me... or could he? My thoughts were swimming in a sea of moral quandary. I didn't want him to go.
He paused at the door.
“Okay!” I screamed it at him. “Are you satisfied?”
Time seemed to stand still; suddenly he was beside me, his leather clad fingers wiping away the tears that trickled down my cheeks. I was losing my sanity, I wanted him to kiss me.
“Um.... no, I'm not satisfied... not just yet.” His sinister laugh filled the space between us as a purplish swirl of smoke surrounded him and he vanished.
A cold chill slithered under my skin like an icy reptile and my heart shivered. Now all I had to do was wait. Seth would tell me who and when, and I assumed provide the means to do it. I had no idea how to kill someone; I'd never thought about it.


Bit by bit, his evil had bled into my soul. Possession. That's what they called it. But there would be no exorcist for me; only a 6 by 8 foot prison cell. There was no way around it, I'd be guilty, and I would confess. And I'd have a ready made defense; the devil made me do it. Of course, no one would believe that it was the truth. Fortunately, or perhaps unfortunately, I lived in a state that had no death penalty. They would put me away for a long time; my sole comfort, that the devil may care.