A Bottle of Regret 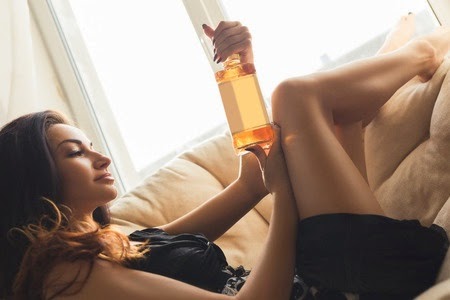 Sarah opened her eyes and squinted as she glanced around the room. Her focus was a little off because she'd slept in her contacts. The blinds were drawn tightly but slivers of muted light filtered in here and there and she figured it was around eight-thirty in the morning. Normally she would have awakened at sunrise, but not today; not after last night. She stifled a yawn and fought the urge to stretch. The man from the previous nights debauchery was still asleep beside her and the last thing she wanted was to awaken him. There would be questions. Too many questions. And awkwardness, there was always awkwardness afterward. She hated that. It wasn't like in the old days when they'd leave you asleep in bed and plop a few bills down on the nightstand. But those days were gone. Now they wanted to face you in the morning, have chit chat and pay extra for a quickie after breakfast. She shuddered inwardly just thinking about it.
She slipped her hand from beneath the thin white sheet, gently rubbed her eyes and then massaged her forehead. Her entire head ached. Served her right, she'd broken her number one rule: no alcohol. An empty whisky bottle lay on the floor next to several condom wrappers. What had she been thinking?
She'd made the no drinking rule almost four years ago after she'd been severely beaten and left for dead by some creep she'd picked up on the corner of South and Main. He'd had blue eyes and a boyish grin and two bottles of tequila. And she'd ended up in the hospital for a week. She still didn't remember much about it. Then Carmen had fired her, put her out on the street; said she couldn't afford to keep insurance on girls that posed such a high risk. Sarah had been freelance ever since. At the time it hadn't mattered much, she knew that eventually Carmen would have found out she was underage and would've sent her packing for that. It had all been a blessing in disguise. Since she no longer had to hand over forty percent of what she made to someone else, Sarah could afford a nice apartment, high end clothes, a car and her own health insurance with no help from anyone. How many nineteen year olds could say that?
The man beside her rolled onto his back and began to snore. That was her cue. She carefully slid out of bed, retrieved her clothes from the bathroom and got dressed. As she pulled her sexy black dress over her head the man let out a loud snort and gasped for breath several times in succession. She froze and waited for him to open his eyes but he didn't. The sooner she got out of there the better. She grabbed his pants from the floor and found his wallet. She took three hundred bucks from the five he had and then flipped through his photos. She couldn't believe anyone still carried pictures in their wallet. It was old fashioned and sweet; she smiled sadly. No one had ever had a picture of her in their wallet.
There were several photographs of a school aged boy and a toddler girl; must have been his kids. There was a picture of him and a middle aged woman in a bikini at the beach; that was the wife. And then the last one was a little girl of maybe six or seven, lying in a hospital bed. She had black circles under her eyes, no hair and a huge smile on her face. There was an IV needle stuck in her arm, but she looked... happy.
Sarah got a lump in her throat and she dropped the wallet on the floor. Tears streamed down her cheeks as she looked over at the man now sleeping soundly.
From what she remembered it had been a pleasant evening. Drinks, but no dinner. He'd gotten them a room and they'd drank some more; she'd stripped for him, talked dirty and then they'd had sex a few times. Nothing kinky, nothing out of the ordinary, just straight sex. And then he'd gone to sleep, and she'd finished off the bottle and apparently passed out.
She slipped on her shoes and stood over him watching him sleep. She put the three hundred dollars on the nightstand and leaned down and kissed him on the cheek. As she left she grabbed the empty whisky bottle and took it with her. It no longer held whisky, but for her and a man whose name she didn't know, it would always be filled with regret.

Posted by LoLa Autry at 4:16 PM No comments: