Demon Is the New Normal 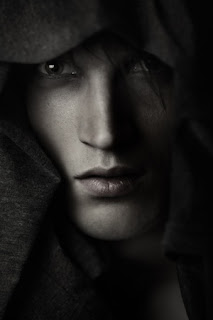 The doctors told me that Fridays would be the worst. They hadn't said why, but this was my second one as a free woman and I had to agree with them, but perhaps not for the same reasons.
I attempted my usual routine; two black coffees, six cigarettes and then a hot shower. I stood in the bathroom wrapped in a fluffy white towel, but still managed to drip water onto the marbled tile floor. I didn't care, I was in agony. The piercing screams inside my mind had begun again; I fell to my knees holding the sides of my head. I'd missed two doses of medication, now he was back cursing at me and telling me what to do.
Cathan. The demon that controlled my life. Unless I had those little pink pills, my 20 mg. a day, he made me do things. Criminal things. Things no one else knew about. Secret things. Things I loved. Things I craved.
I couldn't lie to myself anymore, I missed him... my demon.
Even though he became abusive when I didn't listen, he had loved me when no one else had. So I didn't mind doing small favors for him. It made a part of me deeply happy.
And all I'd done since I'd been locked up and made to take pills was cry.

I'd lived most of my life with Cathan screaming my name. I was pretty used to it, and even the painful headaches that followed his outbursts comforted me in an odd way. Cathan was normal. Swallowing pills every day wasn't. I was the only one that understood that. But if I hadn't at least agreed to the medication, my family had threatened to keep me locked up indefinitely. Cathan was dying in that institution, and I knew that even though the pills made him sick, he could survive it. We both could. So I'd nodded my head and gotten released. I didn't want the pills, but I didn't have any other alternative. Now I was pretty much on my own again... well as much as I'd ever been on my own. Me and Cathan. It was a love/hate relationship, but the only real one I'd ever had. I knew Cathan and he knew me, inside and out. It was... comfortable.

Now he whispered to me. I think it was the only way he could be sure I was listening. I got really still and rocked back and forth on the floor. The silence made me shiver. And then his voice changed, it was soothing and warmed me all over, “None of this will matter soon.”
Then he told me to get the pills. I reached up and took the bottle from beside the sink. I knew he was going to make me flush them down the toilet. I could do that.
“Join me,” he hissed in my head. He said it over and over again. “Take all of them. Get rid of those pills. You know it's what you want.”
He was laughing. Was it really what he wanted? Was it what I wanted?
“No, I won't do it!” I screamed at him. I threw the bottle of pills and it hit the wall sending a shower of pink tablets down upon me. Then I saw myself picking them up; I was in a frenzy as I ate them. But that wasn't enough for him. I felt myself being dragged to my feet; then opening the medicine cabinet and taking out the straight razor I had hidden there two years ago as a reminder of how far I'd come.

I inhaled sharply as the silver blade sunk into my wrist. I hadn't been prepared for the pain.
I screamed. Cathan was laughing inside my head. He wouldn't be laughing soon.
“Stop. Please, dear god, stop this!” I begged him.
But still I pushed the blade deeper. I didn't know what I was doing, I had no control.

Now there would be no Cathan and no pills. No new normal. There was only darkness consuming me, and then there would be nothing.
It was in the back of my mind... something evil... I could feel it overwhelming me. Then there was more laughter; sinister, twisted, sick laughter. I looked in the mirror, he was standing behind me with his arms around me.


Cathan smiled wickedly; he was holding the blade.