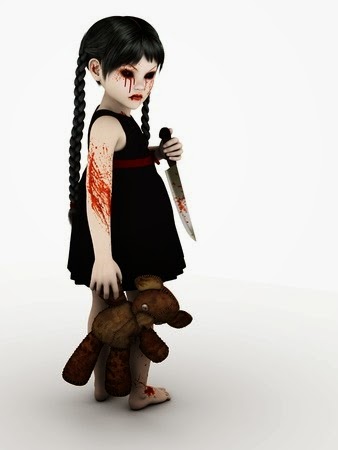 I pushed open the freshly painted white gate and rushed up the steps of my son's newly purchased brick house. He'd just gotten a new gas grill last Sunday for father's day and was anxious to try it out. It was the first BBQ of the summer. I banged on the over-sized green door; once, twice, three times. No one came. I called out to John and then Linda; there was no answer. I turned the knob and stepped inside.
“Hello? Anyone home? Where is everybody?” It was oddly quiet. Something was wrong.
I heard a delighted squeal from down the hall. My grandchildren! I ran towards the sound, but stopped dead cold as I entered the living room. My eyes went to my five year old granddaughter Annabelle standing motionless in the center of the room. There was blood everywhere. Everywhere except on little Annabelle. Horror consumed my soul. There were three lifeless bodies in the middle of the room and she stood over them holding a bloody knife; her clothes were spotless.
I screamed at her and she turned to face me, her big blue eyes shining with glee.
“I killed them grandma. Dan-Dan told me to.” She smiled and held the up the knife.
I opened my mouth to speak but my voice cracked as fear strangled my words. I swallowed hard.
“Baby, put the knife down and come over to me honey. We've got to get you out of here. Now.”
“But grandma, Dan-Dan said to kill everyone in the house. That means you too.” She took a step towards me.
“Annabelle... put the knife down.”
“Dan-Dan says you don't love me.” She looked down at my son, his wife, and my other granddaughter. “They didn't love me. That's why they had to die.”
“Annabelle... honey... where is Dan-Dan now? Did he leave you alone to do this? Has he gone away now? Come to Grams, you don't want to stain your pretty dress... Come on baby, put the knife down and I'll take you to get an ice cream, okay?” I choked out the words as I felt bile rising in my throat.
She looked around the room as her expression changed from child like innocence to that of a trapped animal. She let out a blood curdling screech and flung herself down on the floor, the pool of blood soaking into her pristine cotton dress. She was having a seizure. I ran to her and pried the knife from her hand. I watched helplessly as her eyes rolled back in her head and she convulsed. I couldn't call an ambulance. All I could do was watch in horror as she took her last breath. I cradled her limp body in my arms and sobbed. Whose fault was this? No one had listened when she told them about her imaginary friend, even when she said he had made her do bad things.