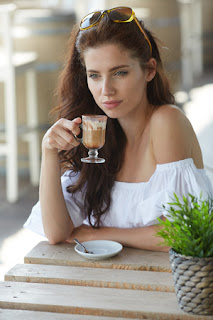 Ella took another sip of her cafe au lait and looked at her phone. Tom was predictably late, but usually just ten or fifteen minutes. Initially, there had been anger over his thoughtlessness, but it had subsided and her emotions had turned to concern. Reluctantly, she shook it off. Surely there was no cause to worry. They'd been meeting in random coffee shops for almost a year now, and he'd never been on time. Plus, he was worth waiting for.
She waved to the waitress for the check. She looked at her phone again. Nothing.
No calls, no texts. Where was he?
Another ten minutes passed and still no Tom. She was rummaging in her purse for change to leave the waitress when she felt his presence behind her.
She turned in her seat, glaring at him over her shoulder.
“Where the hell have you been? I thought... I thought something had happened to you. I was...” she paused not wanting to admit to him how deeply she really cared.
“Oh, how sweet, you were worried about me. Well, I just like to see if you'll wait for me.” He smirked.
“So you're testing me? Seriously? I was getting ready to leave. You're coming up on two hours now. I think you beat your own record.”
“Come on Ella, don't be mad.” He produced a red rose from behind his back and smiled that dazzling smile that made her heart race; his green eyes twinkling with mischief.
“And you think that's all it will take? A rose and a smile?” Her countenance was stern. But she couldn't hold it for long and let out a defeated sigh. “Yeah, okay.”
She took the flower and her face softened. She was fully aware that he was working her but she didn't care. Within the next hour they would be naked and entangled with each other in a motel bed, everything else falling into oblivion. She was slowly becoming accustomed to his lateness, his excuses, and his utter disregard for her schedule and her feelings; and now she couldn't stay away. He brought her the utmost pleasure, and an escape from her husband Mark, an over-bearing, abusive control freak. The tighter he held her, the farther away she had become; mentally and now physically. He was the reason she'd become such easy prey for Tom.
She had traded one master for another, and she didn't even realize it.
Tom was just as controlling and abusive in his own way. He used sex to manipulate her. She enjoyed it but it didn't mean she hadn't fallen into the same trap all over again.
It was easy to call it abuse when Mark left bruises. Or when he openly belittled her in front of their friends, humiliating her at cocktail parties by calling attention to her lack of book smarts. He always turned it off as a joke of course, and she always tried to laugh so no one else realized his true intent; but Ella knew.
Tom was different because he was subtle. He'd been doing this a long time, and Ella was hardly his first. He had perfected the art of skillful debasement.
He was having the time of his life. Ella was easier to manipulate than any woman he'd ever been with, it's what kept him coming back. He could make her do just about anything, and he never even had to ask.
So it came as no shock when she suggested getting rid of her husband. Tom had no interest in pursuing anything beyond what they did in seedy motel rooms, but Ella didn't know that. And he had already felt a twinge of boredom... so why not? Ella would murder her husband in the hopes that with him out of the way, she and Tom could finally be together. And Tom would get to experience the thrill of ultimate control.
He smiled. Yes, Ella would kill for him. She wouldn't kill to save herself, but she'd do it to trade herself into a different kind of slavery to another man. She was beautiful, but quite stupid.
It didn't take long to lay out a simple plan; Mark was to be the victim of a random break in. He'd surprise a burglar and poor Ella would come home from shopping to find his dead body in the living room.
She'd been careful over the years to hide evidence of his anger; no one knew she was a battered wife. No suspicion would fall on her, she adored her husband, all of their friends would confirm it. Ella had renewed hope for her life now; and she was certain she could pull the trigger then play the part of the grief stricken wife.
They planned the murder for the following Friday; she had a week to practice her story.
Tom gave her the gun he'd bought months ago, the day after he met her. He had known he would need it for something. But he hadn't dreamed it would be anything this exhilarating.
Surprisingly, the plan went off without a hitch. Ella played it to the hilt. It would be a closed case soon enough.
She met Tom three days later at a deserted gas station six miles out of town to give him back the gun.
He sat in his car and waited for her, grinning as he watched her pull up and park next to him. She got out of her car, the gun in hand and walked slowly towards him. He rolled down the window, and motioned for her to get into the passenger side. Why not have one last tumble in the sack?
He was still smiling at her as she leveled the gun and shot him in the head. She took his watch and his wallet and left him wide eyed, slumped over the steering wheel of his Mercedes.
Ella was indeed very beautiful, and she wasn't so stupid after all.