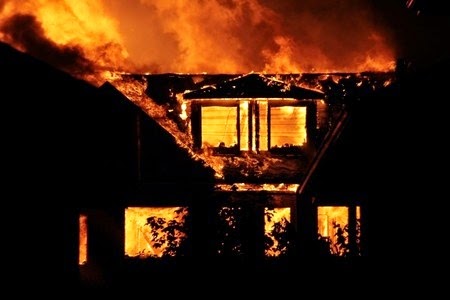 With the strike of one match, my world had changed. I looked around at the chaos I had caused and breathed in the scent of burning wood and flesh. This was different than the last time. I was more in tune with my feelings. Now I knew I was on the right track. Even the air felt sharper; it was cold and clear and beyond the smoke, I could see my life had purpose. I learned something today. I learned an easier way to kill, one that I enjoyed, one that I could get away with.
Daddy sat with me on the curb, watching our house burn to the ground. He put his arms around me and held me for a long time, tears streaming down his face as he tried to be strong for me. I'd lost my mother and my younger brother in the fire. But I didn't cry; I wanted them gone. Daddy wasn't like them; he understood me, he loved me. No matter what, he loved me. I thought about telling him what I'd done, but decided against it. Perhaps it wasn't a good idea to test his love for me when he was so obviously shattered. He had loved my mother. But then, he didn't really know her; not like I did. I'd watched her and studied her and kept journals about her. Where she went and who she saw and what she did with them. She had been unfaithful to daddy many many times. I'd been left sitting in cars in motel parking lots for hours at a time. I wondered sometimes if she was making money at it. It wouldn't have come as a shock. I even suspected my younger brother Jaime wasn't really my brother at all but the bastard spawn of one of her many dalliances. He was as sick and evil as she was, spying on me when I was in the shower and stealing my under clothes. He'd never been so bold as to try to touch me, but I knew it was just a matter of time. Now I was free of them, and daddy was too. I'd done it for both of us.
The fire report would show the the fire started in Jaime's room. Cigarettes. He'd been smoking in bed. Bad Jaime. He was only eleven, but he'd been hanging with a bad crowd since the end of the summer when he'd started middle school. I confirmed it to the police, I'd known about the smoking for a few months, but he was my baby brother and I hadn't wanted to get him in trouble with my parents. I was so sorry now, I should've spoken up. I even tried to seem broken up about it. It seemed to have worked, the officer put his arm around me and escorted me back to my father. I was in control now. I hadn't felt that way in years. I bowed my head and smiled; it was nearing the end of June and it was going to be a long hot summer.