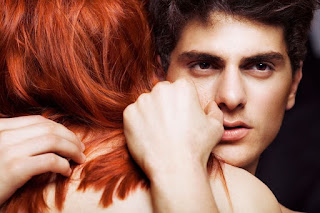 Rotten to the Core

I’d given him every opportunity to change and sometimes, it looked like he had. He’d hold the door open for me, pull out my chair to seat me in restaurants, and open car doors.  He brought me flowers, & chicken soup when I got a sniffle, and carried up the packages I would get in the mail because they were “too heavy” for me to lug up the stairs.

But it was all just an act.
He was evil.
An evil charming bastard.
He was rotten to the core.
But I loved him. And I suppose, that was my fatal mistake.
I never should’ve let him back into my life.

Last Friday night, he called after work & invited himself over. Said he’d bring Chinese from my favorite take-out place; he just wanted to see me again. No strings.
And, after all, I’d said we were still friends. Hadn’t I said that?

It had been a long day, and I didn’t feel like arguing with him,
‘sure, come on over’, I’d said a little too quickly.

We had stopped seeing each other over 3 months ago. He had become jealous and obsessive, and my friends were on me to dump him.  I couldn’t fight all of them, and the whole ugly mess was just wearing me down.
I had told him that I thought we should see other people… just for a while I’d said, and that we could still be friends. I had hoped that would ease the break up.
He seemed to take it well, and then the next week, I started getting calls. Late night, heavy breathing calls. Hang up calls. Wrong number calls. Middle of the night calls. One ring calls. I knew it was him.
When I was out alone, I’d catch glimpses of him out of the corner of my eye… he was following me. I felt it.
Then the letters came.  Just a couple the first week, and then one every day, for almost a month.
Beautiful poetry at first, and then…darker ramblings; nothing really threatening, just creepy enough that I would tell my friends about it, and let them know how right they had been that I should dump him.

Naturally, my friends were freaked out, and begged me to go to the police. And I did. I filed a report.
But that was it.  And then nothing.
All of it stopped.
It had all ended, and after a few weeks, I’d forgotten all about him. Well, almost.
It was difficult coming home to a cold empty bed every night, when I’d gotten so used to John being in it. The last few weeks we were together, he’d practically moved into my place. I missed him. The good John. My sweet, caring, nurturing John.
My lover John. Some nights I awoke & would’ve given anything if he had been there to hold me.

You don’t understand that do you?
Well, it’s always easy to forget the bad stuff.
Even the crazy bad stuff.
If you really want to.

So, when he called, I just couldn’t say no. I didn’t want to say no.
And like I said, it had been a very long day, and I didn’t want to argue with him over the phone.
And, well… I did miss him.
In some ways.

It was past 7:30 when he finally arrived. I was pretty tired and hungry, and I  was already a bit on edge, so the subtle rude things he did, like helping himself first & starting to eat without me, that might normally have gone  unnoticed, screamed at me, and I corrected him.
Big mistake.
He snatched up the cartons, stormed past me into the kitchen & threw every bit of our dinner into the garbage.

“You’ve got problems” I said, not an ounce of shock in my voice. “Really serious problems”.
He laughed.
“Yes, I do. You really have no idea. But my problems, are about to become yours.” His eyes brightened and he smiled with that side-ways smirk, the way he always did when he had gotten the upper hand.

That did it. I had had enough.

I had made another mistake, and I knew it. I had allowed him back into my life, and he was working his way back into my heart, all within about 20 minutes. He was doing it all to me again.
Suddenly, I remembered the bad stuff, it all came flooding back to me.

“Are you threatening me? Because if you are, let me give you a little something to mull over. I’ve already been to the police and they know all about how you’ve been stalking me; the harassing phone calls, the creepy letters, turning up everywhere I go, and if anything happens to me, you’ll be the first one they drag down to the station. So I wouldn’t feel too smug if I were you.” I looked straight at him without blinking, making sure he knew I wasn’t afraid of him.
His dark eyes flashed with excitement.
“Oh yes, Leah, I know all about your little police reports. I’m not worried. Not worried at all, so don’t go trying to play my game against me, okay? I’ll win every time. Because I’ve been doing this for a very long time, and I’m very good at what I do. Very good.” He took a step towards me and grabbed my arm twisting it up against his chest.
“Don’t discount your role in all of this sweetie, you’ve been my star player.” He tightened his grip & I winced, trying hard to hide the pain he knew he was inflicting. He laughed at my obvious confusion.
“Haven’t you pieced it together yet? Damn you’re a lot slower than I thought. All the girls that are missing? They’ve all been new girlfriends of that ex of yours, Tommy was it? So when the police start looking at suspects... well, you'll be top of the list. Oh, honey, I thought even you might have figured that one out.”
He shoved me backwards, and I fell over the dining table, the horror evident on my face.
“Kiss-kiss, sweetie.” He made smacking noises with his mouth and was out the door before I could even think of a response to this insanity.
I fell to the floor and heaved, thankful now that my supper was already in the garbage.