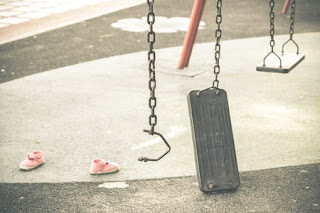 “Olin Elijah Whitaker!”
I heard Miss Johnstone screaming at the top of her lungs from across the playground.
The boy sitting on top of me rolled off and got up, running away.
I couldn't move; paralyzed with fear, I was face down on the ground. I had a mouthful of dirt, and scraped knees; my pink and blue flowered dress up around my neck, my underwear pulled down on one side.
Lily Johnstone ran past the groups of children on the monkey bars and swings, barreling towards me at break-neck speed. She snatched me up and smoothed my dress as she pulled me into a protective hug.
“There now Amelie, it's all over. Olin will be severely punished. You just let it out honey. It won't ever happen again.”
I wasn't even crying anymore. I was all cried out.

I blinked my eyes trying to shut out the memory; unintentional tears rolled from the corners of my eyes. I wasn't cried out after all. But there was no comfort to be found in a county emergency room. All I felt was the cold.
And Miss Johnstone had been wrong. Time after time, she had been wrong.
The doctor mumbled something to the nurse and he left the room. I was glad. Enough people had seen me naked for one day.
I was ashamed. Not unlike that embarrassing day on the playground.
I had been seven then, I was thirty-seven now. Time had flown by, and nothing much had changed. Continual onslaughts against my person-hood; my privacy; my soul. Life had not been gentle with me. Not since Olin Whitaker.

I pulled the paper gown close around me. I wondered what had become of Olin. Probably in prison somewhere. I hoped so.
Thirty years ago he'd shown me the brutal side of human nature, and it was all I had bothered to see since. Today had been no exception.

“Miss Donovan, the police would like to speak to you now.” The nurse opened the door and a male and female officer entered the room. I glared at the male and rolled my eyes.
He stepped back, letting the female officer introduce herself, and then him.
“Miss Donovan, I'm Officer Denise Pettit,” she spoke softly as she motioned towards the uniform behind her, “and this is Officer Whitaker...” I bolted upright, not hearing any of what came after.
Fear struck my very soul.
My eyes pierced through his, boring into his skull. It was him. Thirty years later, and that bastard was a cop now.
I lost control and lunged off of the exam table towards him, shoving Officer Pettit out of my way.
I clawed at his face, leaving long scratches down both of his cheeks before Officer Denise tackled me to the cold tile floor.

I was handcuffed and read my rights. No one ever asked me why. They didn't care. Now I would be taken to the county jail, with no one to bail me out. And there I would suffer yet again, innumerable barrages against my person-hood.

It would be for me, business as usual.

*This is a work of fiction. Any resemblance to real persons, places or situations is purely coincidental.
Posted by LoLa Autry at 11:02 AM