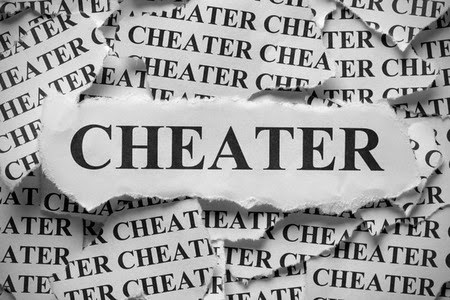 John asked me to meet him at a diner two blocks from our apartment. Reluctantly I'd agreed. I knew he was upset with me, and I wasn't in the mood for a confrontation. But I'd been caught, and I had to face the music; smooth things over, make my apologies and promise not to do it again. I had a speech memorized.
"So what now?" I played with a pink package of sugar substitute, flipping it over and over with my fingers. I didn't look at him; it was part of my act.
"What do you mean 'what now?', nothing now. You go do whomever you wish, and I'll do the same." John's voice was calm and steady. He meant it.
"Just like that? It's over? Come on I'm sorry. Look, I made a mistake. I..." I didn't get a chance to finish, he angrily interrupted me.
"Don't, okay? Just don't."


He snatched his jacket from the back of his chair, threw twenty dollars down on the table and rushed for the door. He paused when he got to it but didn't turn around to look back. I heard the bell on the door jingle and our waitress call after him to 'come again'. I wanted to cry, but I couldn't. It didn't matter now. It was done. We were done. And I hadn't even gotten to recite my well rehearsed apology.

I was entering new territory now. I hadn't been single in a long time. Not since junior high when Frankie Anderson dumped me after I'd kissed his best friend Tommy on a dare. I guess things hadn't changed much since then. I'd promised not to do it again, but by the weekend, Tommy and I were going steady, and Frankie was a faint memory.

The waitress came over and picked up the money and the check. She smiled at me, oblivious to the scene that had just gone down.
"Would you like a refill on that coffee, hon?"
"No, thank you." I replied, still trying to remember how it felt hiding under the bleachers with Tommy; our lips pressed together and my eyes wide open, hoping we wouldn't get caught. And of course we did. Frankie and Tommy had fought over me; both of them got suspended for two days, and I got a reputation. One I'd never live down.
Now fifteen years later the same scenario was playing out. Only this time, I hadn't been dared. I'd chosen to meet Colin at Mason's Motor Lodge just because I wanted to and I hadn't kept my eyes open. I hadn't cared if I got caught; I knew John would never leave me. He loved me. He had too much invested; we'd been married for nine years. He would forgive me, just like he had the last time. And just like I'd done to Frankie, I'd promised it would never happen again.
I lied.

But this time, John didn't forgive me. Now I'd lost my husband and my lover. I hadn't considered that one. Colin bolted as soon as he found out that John knew about us. I guess he was afraid John would confront him. I kind of wish he had. At least then I would have known he cared. Or maybe then I would have felt something.

What made me cheat? Not just with Tommy or Colin... there had been many others. A long string of lovers I'd kept on the side; even before I'd married John. There was always someone else... a back up. I lived for the excitement, the thrill of almost getting caught, but there was more to it than that. As long as I cheated, there was a part of me that could never be known; never be shared. It was a secret I kept for myself. That made me selfish and a liar; but I could live with that.

For just a few minutes, I sat feeling for sorry for myself, sipping my coffee and eyeing the apple pie on the counter. As my eyes sought out the waitress, I noticed an attractive man at the end of the counter. I looked him over, visually undressing him and imagining how he would look fresh from the shower, wrapped in one of my towels. It wouldn't be cheating now.
I finished my coffee, thanked the waitress and left her to tend to the hot guy at the counter. I was practically a single woman, free to be with whomever I chose.
Where was the fun in that?